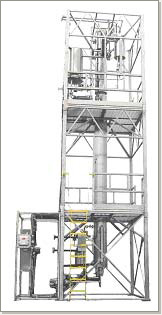 Distilled Biodiesel is the future of Biodiesel. Most of the specifications that are in works through ASTM or the special quality requirements of big oil can easily be addressed with Biodiesel distillation.

Distilling Biodiesel will eliminate a majority of blending issues with Petroleum Diesel and no more worries about the future ASTM 6751 updates on Mono, Di and Tri Glycerides. Also, reduces Sulfur (to under 15 PPM) from high Sulfur feedstocks such as Tallow, Chicken Fat or Pennycress.

Distillation is a process used to separate a mixture of two (or more) components into its virgin state by heating the mixture to a temperature between their respective boiling points.

For example, at atmospheric pressure, water boils at 212°F and ethanol boils at about 176°F. If the mixture of water and ethanol is heated to about 195°F, the ethanol will boil and be changed into vapor which is then collected and condensed. The water will separate and remain as a liquid.

A fractionating distillation column is used to make this process more efficient. See the picture below to better understand how columns work.

The distillation column is made up of a series of stacked plates. A liquid feed containing the mixture of two or more liquids enters the column at one or more points. The liquid flows over the plates, and vapor bubbles up through the liquid via holes in the plates. As liquid travels down the column, the vapor comes in contact with it several times due to the multiple plates – a critical process in distillation columns. The liquid and vapor phases are brought into contact because as one molecule of higher boiling material converts from vapor to liquid phase by energy release, another molecule of the low boiling material utilizes the free energy to convert from liquid to vapor phase.

The base of the distillation column contains a large volume of liquid consisting mostly of the liquid with higher boiling point (in our example, this would be water). Out of the base flows some of this liquid, some of which is heated in the re boiler and returned to the column. This is called the boil up. 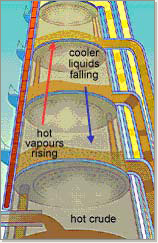 Some vapor escapes from the top of the column and is returned to a liquid state in the condenser. Some of this liquid is returned to the column as reflux, and the remainder is the top product or distillate. Vapor and liquid phases on a given plate approach thermal pressure and composition equilibrium to an extent depending upon the efficiency of the plate.

In essence, the hot mixture is pumped into the bottom. The tower acts as a heat exchanger, removing heat from the vapors as they rise. Some of them condense back into liquids and fall back down the column.

The temperature gradually decreases as you go up the column. Different groups of hydrocarbons condense at different heights – the heaviest at the bottom, the lightest at the top. The final product is in its virgin state.